A gastronomic journey with the cheeses with PDO of the Central Region, broadcasted on January 10, 2021 through the program Essência of RTP3 and the wine magazine.

Action integrated in the Program for the Enhancement of Cheese Production in the Center Region, Project co-financed by CENTRO 2020, Portugal 2020 and the European Union through the European Regional Development Fund.

The Program “Valorização da Fileira do Queijo da Região Centro”, co-financed by Centro 2020, Portugal 2020 and the European Union through FEDER, was present today in the program Praça da Alegria, in RTP1. Highlight for the display of the cheeses Serra da Estela PDO, Beira Baixa PDO and Rabaçal PDO, report with a Shepherd, conversation with Inovcluster and also a gastronomic moment with a chef to make these cheeses of unique flavor shine.

https://queijoscentrodeportugal.pt/wp-content/uploads/2021/01/9_11_Programa_de_Valorização_da_Fileira_dos_Queijos_da_Região_Centro_na_Praça_da_Alegria_13.jpg 649 927 ricardoneves https://queijoscentrodeportugal.pt/wp-content/uploads/2020/05/lgoo-temp-branco.png ricardoneves2020-11-23 14:41:112021-03-01 15:08:02Program for Enhancing the Value of Cheese from the Center Region, highlighted on the Praça da Alegria Program

COAPE, partner entity of the Program for the Enhancement of Cheese Production in the Center Region, continues to reinforce the land collection for the Land Bank in the D.O.P. region of Serra da Estrela.

Learn more about the action and enroll in it at https://coape.pt/bolsa-de-terras-pastores/

It was held during this morning, in the Vergílio Pinto de Andrade Auditorium, of the Superior School of Agriculture of the Polytechnic Institute of Castelo Branco, the Solemn Opening Session of the School of Cheese Makers, a pioneer initiative in the country, which is part of the Program for Enhancement of the Cheese Sector in the Center Region.

The session was attended by the Minister of Territorial Cohesion, Ana Abrunhosa and Jorge Brandão, Executive Member of the Steering Committee of the Operational Program CENTRO 2020.

This project is co-financed by Centro2020, through FEDER.

Presentation of the action integrated in the Program for the Enhancement of Cheese Production in the Center Region of Portugal, a Project co-financed by CENTRO 2020, Portugal 2020 and the European Union through the European Regional Development Fund. To watch, click here.

https://queijoscentrodeportugal.pt/wp-content/uploads/2021/01/5_Programa_de_Valorização_da_Fileira_dos_Queijos_da_Região_Centro_em_destaque_no_Sociedade_Civivil.jpg 713 1254 ricardoneves https://queijoscentrodeportugal.pt/wp-content/uploads/2020/05/lgoo-temp-branco.png ricardoneves2020-09-29 14:31:482021-03-01 13:48:20Program for the Valorization of Cheese Production in the Center Region, presented in the Civil Society Program 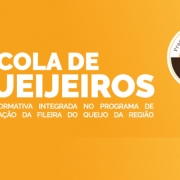 Applications for the School of Cheesemaking are now open! Applications are open until October 2nd, 2020, through the online form: https://forms.gle/dtseaSpHP3mBqiTs5Todas the information available in the current Regulations: http://www.inovcluster.pt/…/escola-de-queijeiros…

The partnership of the Program for the Enhancement of Cheese Production in the Center Region, aware of the period of uncertainty experienced in recent months, remained active in boosting its activities related to the industry.

Aiming to leverage the Milk Production in the entire Center Region, the partnership was focused on promoting two contests: Vale Pastor and Vale Pastor+.

Vale Pastor, is a contest that aims to award a prize money of 5000 euros to entrepreneurs who have successfully completed the “Shepherd School”, already installed or wishing to settle in the activity of agropastoralism for milk production and its supply to dairies that produce cheeses with D.O.P. in the Central Region, having already finished the phase of accepting applications.

Vale pastor + is a contest which aims to award a cash prize of 2500 euros to entrepreneurs, milk producers who supply or wish to supply milk to cheese dairies producing cheeses with D.O.P. and who present the best quality milk. This contest took place as planned, having concluded in the first half of 2020 the phase of sending the analytical bulletins of the control performed on the milk that took place during six months, according to the contest’s regulation.

Under the coordination of Intermunicipal Communities in the area of coverage of the candidates to the competition, including CIM Coimbra Region CIM, CIM Beira Baixa, CIM Viseu Dão Lafões and CIM Beiras and Serra da Estrela, with the strong collaboration of INOVCLUSTER and Cataa – Center for Technological Support Agri-Food. Both contests are in phase of evaluation and ranking of candidates for the awarding of the respective prizes. Once the ranking phase is over, the candidates will be duly informed.

Applications are now open for the Vale Pastor award, a competition aimed at all entrepreneurs who have attended the “Shepherd School” training.

The applications are open from June 1st to June 20th, through the link: https://forms.gle/DcfrDAq6UeQoPkJ66